Syracuse Hospital for Women and Children

The Syracuse Women's Hospital and Training School for Nurses was incorporated April 25, 1887 and opened to patients in November (1) in a small house on the corner of Geddes and Elliott streets. At the time, no hospitals in the city cared for maternity patients or children specifically, so  a group of charitable women set out to fill the need (3). It is noteworthy that for the duration of the 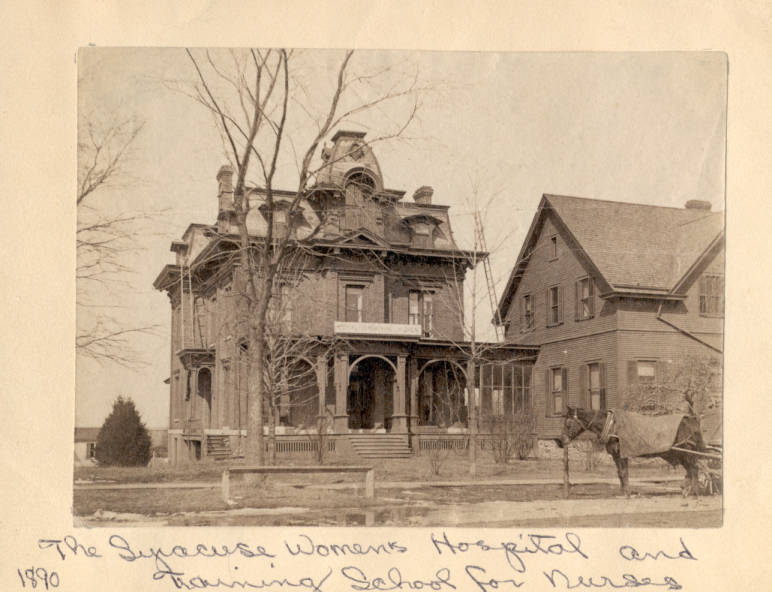 hospital's existence, even as it became known as Syracuse Memorial Hospital, it was always operated by an entirely female Board of Trustees (5).

Before it even opened, the scope of Memorial's work was expanded to include all diseases of women to ensure there would be enough patients  to interest the more prominent medical practitioners (3). The original by-laws permitted staff to be of both schools of medicine, eclectic and allopathic (3).

The original Geddes Street location, staffed by only one woman, proved insufficient for the purpose and the Hospital was relocated to a larger home at James and Sedgwick Streets in the summer of 1888 (2). The home belonged to Erastus F. Holden, who gave the Hospital the property rent free for two years (2).

Image 1: The Syracuse Women's Hospital and Training School for Nurses 1890,

After the end of that two year term, the Hospital purchased a property on West Genesee Street. The purchase price was $8,700 and renovations cost around $2,000, including construction of the Silver Cross Cottage where pediatric patients were housed. The funds had been raised by the Ten X Ten Circle of the King's Daughters. The Hospital building was lost to a fire on December 13, 1893, but the Cottage was saved. Needing a new home, the Hospital's patients were cared for at St. Joseph's while another building, which had previously been a private hospital, was organized at 714 East Washington Street (2).

In November 1888, the Harmony Circle was founded as an auxiliary for the Women's Hospital (2), specifically to fund free beds and other endeavors. Insurance money covered the outstanding mortgage on the West Genesee property that had burned, but it had been completely decimated and would require significant funds to re-build. Mrs. Erastus F. Holden offered $15,000 to build a children's pavilion, and other generous gifts were made; but the project was successful due in large part to the Women's Edition of the Syracuse Post that circulated on February 2, 1895 for five cents per copy. The endeavor raised $9,098.61 (2). With donations of additional land from Erastus Holden, the cornerstone for a new building was laid November 23, 1895 at the West Genesee site (2).

The new facility was opened for patients on December 1, 1895, with a cost of $95,000. It was incorporated as the Syracuse Hospital for Women and Children on March 7, 1902 (2). In 1905, substantial legacies were left from the estates of James J. Belden ($50,000), John Lyman ($51,174), and Elizabeth Green Kelly ($55,259), along with several endowments, and thus the building of additional Pavilion space for surgical and obstetrics cases was financed (3). A $10,000 donation from the Hazard family equipped a new laboratory. The Harmony Circle's philanthropic efforts led to the erection of a yet another pavilion in 1908 to commemorate 10 years of their efforts, and by 1924, they had equipped the Hospital with two x-ray machines and supported three free beds (2).

By enactment of the Board of Trustees in 1909, the hospital was authorized to treat special diseases in both men and women. An infirmary for the treatment of diseases of the eye, ear, nose and throat was immediately opened. Patient numbers steadily increased as capacity and services expanded. The first operating year of the hospital (1887) only 144 patients were treated. By the 1911-1912 fiscal year, patient numbers rose to 1,927 (3). The name of the hospital was once again changed in 1918 to Syracuse Memorial Hospital to reflect this broader range of services.

The name of the Syracuse Hospital for Women and Children was changed to Syracuse Memorial Hospital in May, 1918 in indication of the fact that it now treated most ailments of men and women (3). A committee was formed to consider Memorial Hospital's role in relation to the new Medical Center complex being developed on University Hill (3). From the grassroots founding of Syracuse Hospital for Women and Children, came another community-driven effort to build an expanded public hospital. A fund-drive launched in 1926 and involving more than 1,300 volunteers, raised over $2 million in only thirteen days (1). The location for the new  Memorial Hospital facility was just off Irving Avenue. (1)

The new Memorial Hospital opened on September 20, 1929 (1). The new facilities were fully equipped with all the modern medical advancement 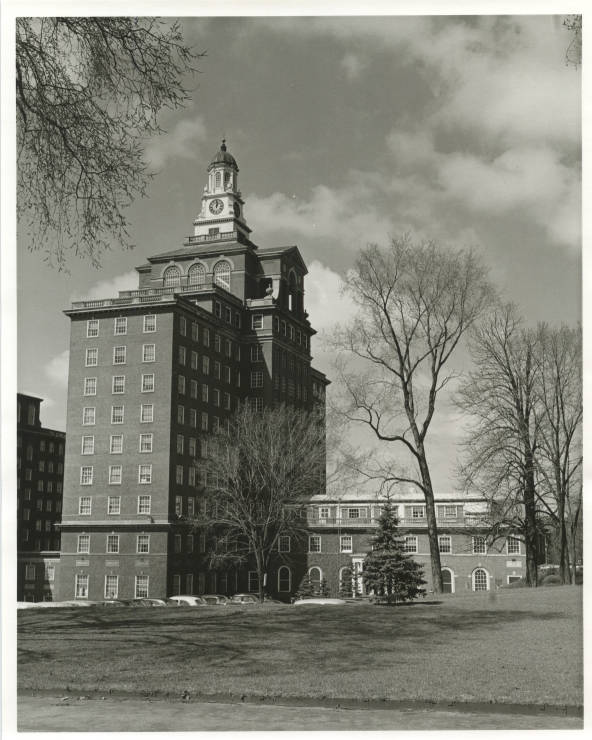 s and could undertake all surgical, x-ray and laboratory procedures required of a general hospital (2). Situated in close proximity to Syracuse University and being part of the contemporary Medical Center complex, Memorial Hospital became the clinical site for obstetric training and its pediatric clinic was an excellent training ground for the fourth year students from the Syracuse University College of Medicine (2).

Memorials original capacity covered 250 patients, with 210 beds and 40 bassinets (2). Three floors were devoted to maternity care and saw more than 1,000 cases a year in the late 1930s, with the pediatric disease floor admitting 1,200 children at that time (2). The addition of a children's ward and the remodeling of various porches in 1943 increased capacity to 330 patients (3). Memorial had the largest capacity of any of the hospitals considered part of the Syracuse Medical Center.

Memorial hospital merged with Crouse-Irving in 1968 in an effort to improve the capital finances for both entities (1).

The Nursing School was dissolved after World War II, when a cooperative arrangement was established with the School of Nursing at Syracuse University (4).

The Memorial Hospital School of Nursing

The Training School for Nurses was established in 1888, one year after Syracuse Hospital for Women and Children was opened (1). Originally, students were expected to be between the ages of twenty and thirty-five and were accepted on a rolling basis throughout the year, with the commitment requiring two years to fulfill (1). In 1897, a Training School Committee and an Alumnae Association were formed (1). Major curriculum changes were brought in 1903 to comply with New York State requirements, courses were extended to three years and the Hospital was registered so graduates could be dubbed Registered Nurses (1). The Nursing School was certified by the Regents of the State University of New York on January 31, 1905 (3). By 1912, 157 nurses had graduated from the school (3). Two houses located across West Genesee street were purchased in 1917 and outfitted as homes for the nurses (2). When the new Memorial Hospital building was erected on Irving Avenue (1929) it included classrooms, labs and demonstration rooms for nursing and medical students (1). The focus of the Memorial School of Nursing stood out against contemporary programs focused mostly on churning out a hospital work force. From Memorial Memoirs (1945), published to commemorate the closing of the School:

In 1932, a group of students formed the Honorary Senior Society, which was renamed the Agenda Society in 1935. The Society formed a connection between the students and the Nursing School administration and Alumnae Society. The Society piloted a successful exchange program with Strong Memorial Hospital in Rochester, which gave students the opportunity to spend three months doing clinical rounds at the other hospital. A student handbook was authored for the guidance of incoming classmates and the Society sponsored multiple enrichment events every year. The Society formed a bridge from The Memorial Hospital School of Nursing to the newly fledged Syracuse University School of Nursing and provided continuity for students during the transition (1).

An advisory council with delegates from SU, the school of nursing at the Hospital of the Good Shepherd, and The Memorial Hospital School of Nursing was formed in 1932 as a first step towards integration (1). In 1934 and 1939, a request was put to the National League of Nursing Education to survey both hospital schools with the intent of uniting into one school under the auspices of the Medical Center (1). A Student Nurses League comprised of student nurses from all five nursing schools in Syracuse - Good Shepherd, Memorial, Crouse Irving, Syracuse General and St. Joseph's - was formed in 1939 to encourage academic and social development of all (1).

The onset of World War II heightened the need for more students while also economizing on instructors and facilities, and made use of  SU's laboratories and classrooms combined with the hospitals' clinical spaces to provide an accelerated program (1). The Cadet Nursing Corps, established in June 1943, made federal funds available for nursing education, which SU Chancellor Tolley was ready to use (1). In response, the University enrolled its first class of nursing students in June of 1943. This new Syracuse University School of Nursing was created from the merger of the Memorial and Hospital of the Good Shephard Schools (1). The last class from the Memorial Hospital School of Nursing graduated in 1945 (1).

After the War the programs offered by the Syracuse University School of Nursing were limited to only the four year program of study leading to the BS degree, which consisted of two academic years, a ten week summer session in "nursing arts", and almost two and half years spent on clinical training (1). Many members of the Advisory Committee for the School of Nursing were current or past members of the Boards from both Memorial and Good Shepherd, showing the foundation both those institutions' nurse education programs provided for the new school at SU (1).