Beginning in 1967 City Hospital was owned by the city of Syracuse, but rented and operated by Onondaga County. On May 16, 1969, the hospital was renamed the A. Clement Silverman Public Health Hospital. The new name reflected not only the administrative and oversight changes the facility had underdone, but also paid tribute to long-time medical director A. Clement Silverman, 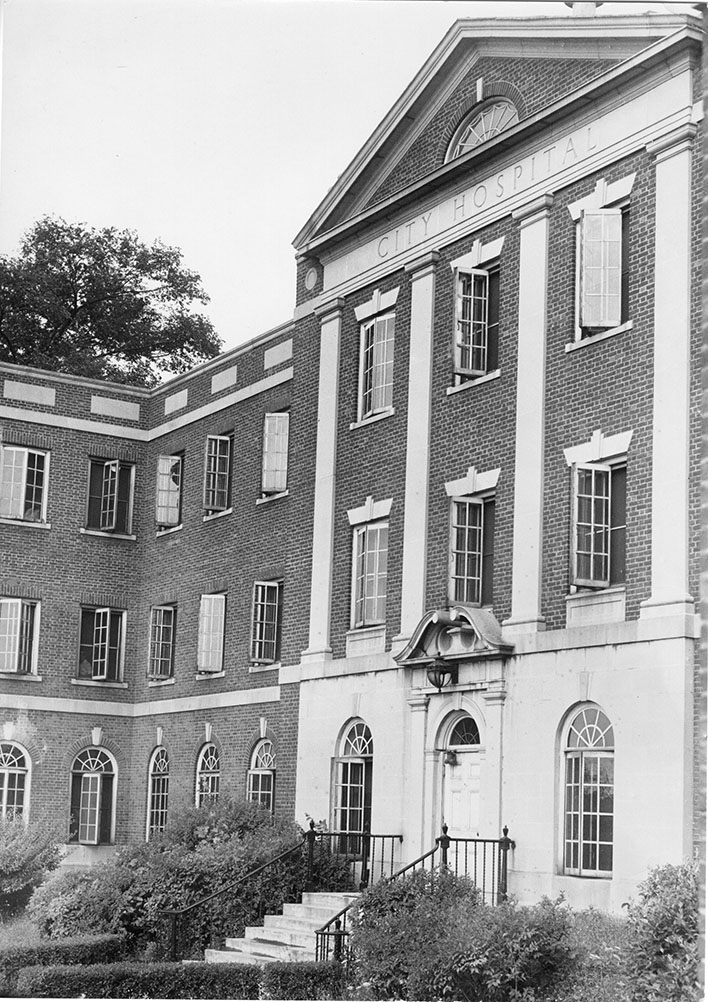 who tragically died the following year in an automobile accident.

As vaccines changed the face of communicable disease, Silverman Hospital began to offer an amalgamation of services that filled crucial needs while other institutions were expanded. An $800,000 renovation in 1967 outfitted the Hospital as an acute care facility. Silverman supplied interim care to patients no longer needing full hospital services. Many of these patients were teenagers with scoliosis spending months in post-surgical body casts after treatment at Memorial Hospital.

Silverman operated an alcohol-detoxification unit, which treated patients in the acute stage of alcohol poisoning. The unit was a partnership between Crouse-Irving Hospital, providing the physicians, with Silverman supplying food, beds, nurses and orderlies. Patients were accepted on a voluntary basis but only if referred from another hospital. Silverman Hospital also provided training for patients and families using hemodialysis units. In another example of cross-institutional cooperation, this program was supported by a grant given to Upstate Medical University. Before this program, patients had to travel to eastern New York for dialysis training. Part of the County laboratory was housed at Silverman, running lead poisoning tests, PKU tests for newborns, as well as tests for the VanDuyn home and the County Health Department Clinics. A "yellow fever clinic" (for travelers) offered on Thursdays was the only service that charged a fee, and that was merely to recover the cost of the vaccine.

By 1974, Silverman was reduced to only 59 beds and not part of the County Health Department’s long-term plans for health care. It cost the County around $500,000 to continue to operate the facility; with almost no revenue generated by the Hospital’s services it operated at a deficit of $400,000 annually. The Community Health Information Planning Services (CHIP) published a study which showed that Silverman patients could be cared for at other facilities with significant savings. Closing Silverman remained a matter of time, but when to close it was hotly debated. All of Silverman's services could be replicated at the other hospitals, the question was could these hospitals take on the care of Silverman's patients before their building projects were completed.

The County thought selling Silverman Hospital was a means to expunge the $1,000,000 in debt it had accrued after taking over the facility from the City. However, Onondaga County never got clear title for the Hospital when it was transferred from the City in 1967. The transfer of deed was drawn up, but never signed by then Mayor William F. Walsh. Thinking Onondaga County owned the building, the County legislature approved more than $750,000 in capital improvements to meet state health codes for general hospitals.

In 1970, Lee Alexander (D) was elected mayor, putting city and county officials on different sides of the political aisle. At this time, a five-year lease was drawn up, retroactive to 1967, including provisions for two five-year extensions. The lease gave the City the option of taking back the hospital, if it provided 6 months-notice. County Executive John H. Mulroy announced that the facility would close on July 1, 1977. Mulroy was hopeful that selling the building would pay off the outstanding bonded debt of $400,000 from the capital improvements.

The phase out of Silverman began in earnest in 1977, with County funding set to expire December 31, 1977. By late June there were six patients remaining and no consensus on where to send them because of their ineligibility for Medicaid, and the refusal of other facilities to accept them, citing lack of space. The County was irate at private hospitals refusals to care for these patients, pointing out that if not for Onondaga County’s VanDuyn Hospital these patients would have been left to die. The 115 employees were assisted in finding different positions.