After the State took control of the Sanatorium in 1948, the staff was enlarged and teaching programs were developed with the Syracuse University College of Medicine and the VA Hospital. Being near the medical center near the University and the VA, the state Sanatorium was situated to participate in early studies of new tuberculosis treatments following WWII. The success of these treatments meant that patients longer required long periods of hospitalization. Case finding was taken over by health departments, with outpatient clinics sufficient for follow ups, and thoracic surgeries, if even undertaken, were done in general hospitals. Drug therapies were successful in rendering the active cases noninfective.

These new developments meant that the numbers of tuberculosis patients steadily declined and treatment rarely required hospitalization. In November 1957, hearings about the future of the Onondaga Sanatorium began. It was determined that the necessity for the institution had past past and care of the 170 remaining patients was transferred, and the 200 employees sought work elsewhere. In July of 1958 Onondaga County Board of Supervisors passed a resolution to apply to the State Commissioner of Health for reconveyance of the Sanatorium lands to Onondaga County. Intentions were to deed 43 acres of remaining forest land to the new Community Hospital Corporation. Buildings and grounds were returned to the County.

New York State closed the Sanatorium in May of 1959. The outpatient clinic operated until 1968 when patient records and equipment were turned over to the Syracuse Bureau of Tuberculosis, which was a continuation of the tuberculosis clinic opened by the city in 1908.

The Van Duyn Center for Rehabilitation and Nursing was eventually opened on the site on 1979. Only a staircase leading to the site and an archway with the Onondaga County Sanatorium name still stand. 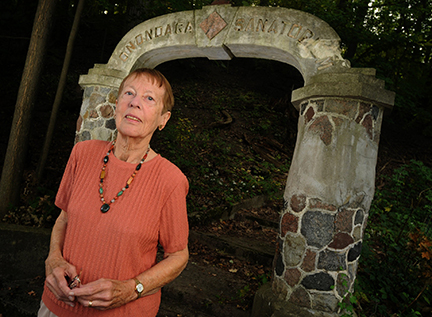