At the close of the 19th century, the bacterial disease tuberculosis, also known as consumption, was among the leading causes of illness in Syracuse. In 1903, Syracuse Health Officer Frederick W. Smith recommended that a hospital for the treatment of consumption be constructed. The first tuberculosis clinic in upstate New York was opened in Syracuse by the City Bureau of Health in 1908, reporting 173 deaths. The following year x-ray technology was brought to the clinic for diagnostic purposes.

On June 7, 1909 the Onondaga County Board of Supervisors passed a resolution to investigate the establishment of a county tuberculosis hospital, but it wasn't until 1913 that the County Board of Supervisors approved the purchase of 137 acres located near Hopper's Glen on Onondaga Hill. The purchase price of the property was $37,000 and $174,000 was budgeted to produce a 150-bed facility. With construction well underway, a Board of managers was appointed in 1915, and included Alfred Mercer MD of the Syracuse University College of Medicine. Rumors of "grafting" (taking bribes) began to spread and eventually one County supervisor was charged and convicted of stealing funds from the project. As a result, a bronze tablet bearing the names of the original Supervisor's Committee was never installed on the building. The building officially opened on September 2, 1916 with only 78 beds completed and costs in the range of $600,000. The campus included two original sanatorium buildings, equipped with modern technology like a Campbell Machine for x-rays, a powerhouse with steam generator and laundry, water and sewer mains, a water tower, underground service tunnel, and access roads. Dairy products, meat, eggs and poultry, and other food to feed patients was produced by the nearby County Farm. 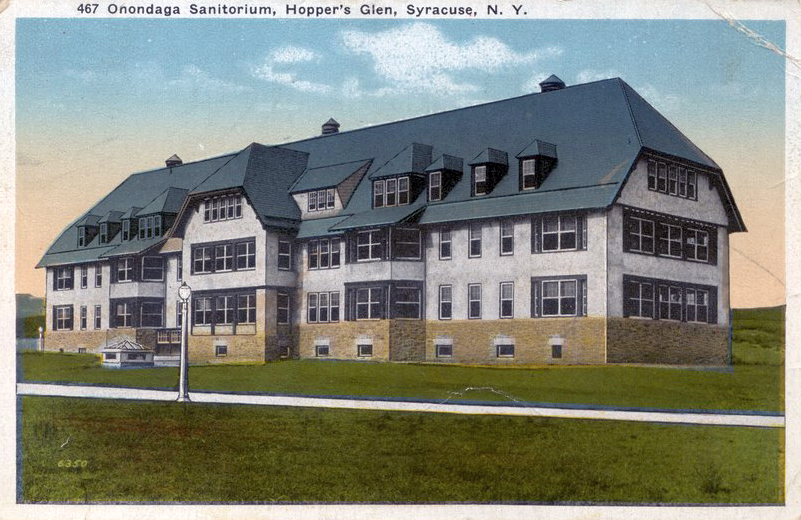 The first patients arrived on October 12, 1916 and the number of patients quickly rose to over 100, well beyond the building's capacity. In the first year there were 399 applications for admittance, with 302 being accepted. Nearly 12% of patients were able to pay something for their care, which totaled more than $2,000 in income. The next year, the daily average of patients in care was 103, despite the 78 patient capacity.  In 1917, the facilities were expanded to include 108 beds, but the Sanatorium still needed to turn away the sick. An Auxiliary was formed in 1919 to fundraise and support additional expansions. The construction of a new Children's Pavilion, which provided schooling through the Syracuse City School District, commenced in 1920 and began accepting patients in August of the following year, increasing the number of beds to 150. In 1929, a totally new Infirmary building was constructed, increasing patient capacity to 255 and making the Sanatorium the third largest institution in upstate New York.

Since opening of the County Sanatorium in 1916 prevalence and death rate from tuberculosis fell considerably. By 1940, the incidence of tuberculosis in children fell so much that the Children's Pavilion was closed. Yet, as new treatment modalities and medical specialties developed, new staff and services were offered. Thoracic surgeons begin consulting at the Sanatorium in 1940 and by 1943 operations to treat skeletal tuberculosis were being performed at Onondaga (began in upstate in 1935 at the Jefferson County Sanatorium in Watertown). As the size and capabilities of the institution increased, New York State took over management on April 1, 1948. The State took responsibility for the maintenance and improvement of the facilities with the understanding that if it ceased to operate as a tuberculosis hospital, all the property and buildings would revert back to Onondaga County.

"A forgotten arch, stairway to memory: Life at the old Onondaga Sanatorium" by Sean Kirst for syracuse.com (November 8, 2008). Accessed January 4, 2022.