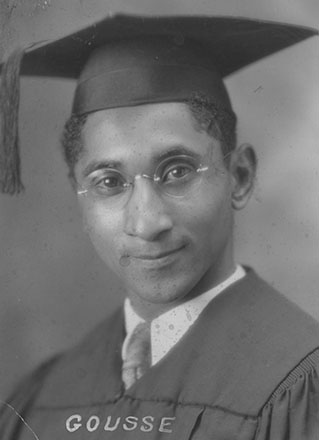 Born in 1899 in Jacmel, Haiti (a one day journey from Port-au-Prince) Abel Gousse, whose father was a doctor, made a promise at six years old to become a physician and care for the people of his village. He left home to attend school in Jamaica and then the United States where he graduated from high school in Mount Herman, MA and attended Colgate University where he received a BS in 1926. He received his MD from Syracuse University College of Medicine in 1929 and completed a residency in surgery and pediatrics at Harlem Hospital.

Dr. Gousse and his brothers all became physicians, but he was the only one to return to Haiti to practice medicine. The compound Dr. Gousse built had at one point a sixty bed hospital and a sanitarium for tuberculosis patients, but those buildings were destroyed by hurricanes. The small clinic he was left with was also his lodgings. His patients all arrived on foot, if they were able to make the trip at all. For thousands of Haitians living in remote villages, the only means of medical care available was provided by Dr. Gousse during an arduous six week journey undertaken every spring by mule. He continued this work well into his seventies, seeing on average fifty patients a day at his clinic.

Bringing medical supplies to the region was always difficult and for years he relied on homeopathic remedies to treat his patients. Lemon juice was used to clean and protect the eyes of newborn babies, a homemade “splenic extract” was used for tuberculosis and for infection he amputated with whatever instruments he could find. Eventually, he could obtain medicine through the Christian Medical Society, but he had to pay heavy import taxes as Haiti would not grant him a tax-free status. He undertook this burdens while charging $1-$2 per patient, a fee he often forgot to collect.

On top of his demanding work as local physician, Dr. Gousse also served as pastor of the Baptist Church in Jacmel, and operated a school at the medical compound to educate the many children who arrived sick and stayed once well.

Dr. Gousse consulted on multiple publications dealing with the practice of medicine in Haiti, including an English to Haitian, where most of the population speak Creole, translator for medical terminology.

Dr. Gousse was honored as the Distinguised Alumni by Upstate at his fiftieth class reunion in 1979. His classmates paid for his travel. He was also awarded an honorary Doctor of Science degree from Colgate University in 1988.