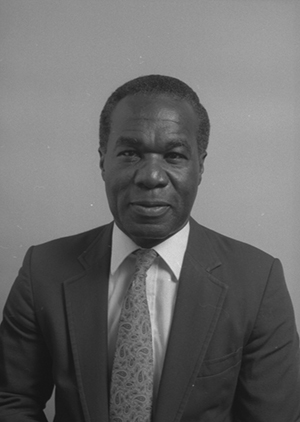 Dr. Potts became the director for Upstate’s Cardiovascular Laboratory in 1977. He established Upstate’s echocardiography program. Dr. Potts served on the Cardiac Advisory Board for the NY Department of Health and was on Board of Directors the Central NY Heart Association.

Dr. Potts was a strong advocate for minority students on campus. He was very involved with the Upstate Minority Educational Development Program (U-Med) at Upstate, which was one of the first programs in the country structured to increase the participation of underrepresented minority groups in medical education. He was also chair of the Affirmative Action Committee and served on the Minority Affairs Committee. In recognition, his colleagues nominated him for the President’s Award for Advancement of Affirmative Action in 1994. The nomination letter from A. Geno Andreatta, Dean of Student Affairs, reads, “Dr. Potts’ contributions to make [Upstate] accessible to underrepresented minorities and increase diversity on this campus are significant. However, his dedication and support of students after they enrolled are equally important. He gave advice. He counseled. He gave direction and led the way for their success.”

The James L. Potts Award was established at Upstate in 1994 and is presented annually to a graduating African American medical student who excels in clinical medicine and makes contributions to the community. Dr. Potts left Upstate to return to his alma mater, Meharry Medical College, the same year. Meharry is a historically black medical school, where Dr. Potts was served as chair of Internal Medicine and chief of Cardiology, among other administrative, teaching and clinical roles.

Dr. Potts was the recipient of the 1995 Dr. Walter M. Booker, Sr. Health Promotion Award from the Association of Black Cardiologists (ABC) and was honored with the Axel C. Hansen Award by Meharry College in 2016. He is a diplomat of the American Board of Internal Medicine (APIM) and the APIM specialty Board of Cardiology and is a life time member of the ABC.