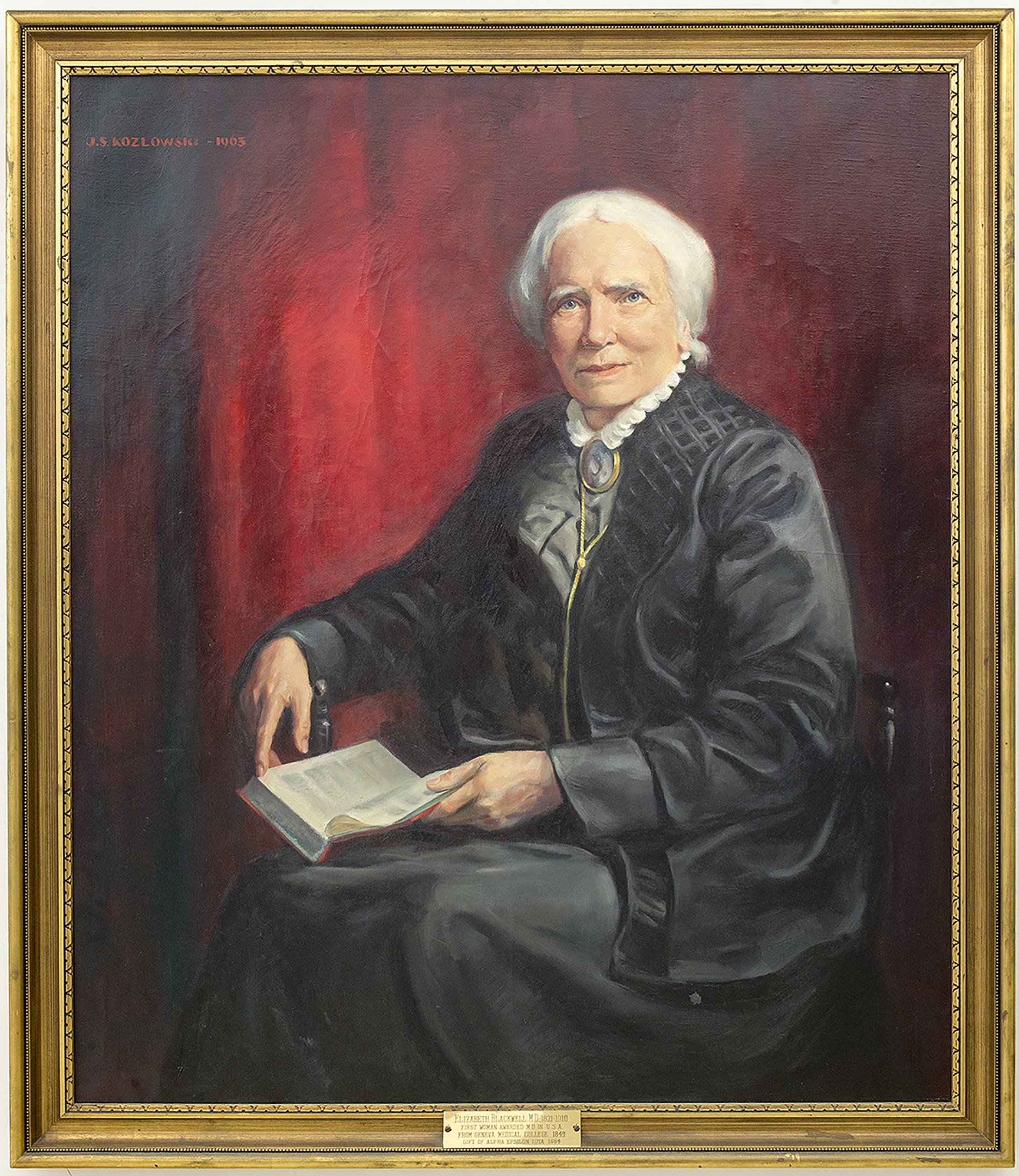 Elizabeth Blackwell was born February 3, 1821 in Bristol, England. The third of nine children, Elizabeth was raised by her father, Samuel Blackwell, a sugar refiner, Quaker and anti-slavery activist, and her mother Hannah (Lane) Blackwell. The Blackwell family included many prominent individuals like Elizabeth's brother Henry, an abolitionist who married suffragist Lucy Stone; her sister Emily Blackwell, the third woman to complete an M.D.; and her sister-in-law Antoinette Brown Blackwell who was the first woman ordained in a mainstream Protestant denomination (Methodist).

The Blackwell family moved to Cincinnati, OH in 1832. When Samuel Blackwell died in 1838, Elizabeth and her mother and sisters worked as teachers to support themselves.

During her time as a teacher, Elizabeth boarded with the families of two physicians and cared for a dying friend who lamented the lack of female physicians to treat her. In 1847 she moved to Philadelphia in the hopes that Quaker friends in the area could assist her entrance into medical school. Her applications were rejected everywhere she applied except at Geneva College of Medicine in Geneva, N.Y. Her acceptance was intended as a practical joke. The faculty gave the final decision on her application to the students, who decided to accept a woman to prank their teachers. No one expected that Elizabeth would begin, much less complete, her studies at Geneva.

Elizabeth Blackwell graduated top of her class on January 21, 1849, after eighteen months of study. Blackwell faced discrimination from fellow students, faculty and the local community, which shunned her as an unnatural woman. She eventually earned the grudging respect of professors and classmates, but felt her continued training would be better done in Europe.

She worked at hospitals in London and Paris, where she was routinely relegated to midwifery or nursing. She did manage to complete enough training to work as a surgeon. It was during her studies at St. Batholomew’s Hospital in London that her lifelong friendship and collaboration with Florence Nightingale began.

Dr. Blackwell relocated to New York City in 1851 where she faced continuous prejudice as a female physician; it was nearly impossible for her to practice in hospitals and clinics. In 1857, she opened the New York Infirmary for Women and Children with her sister Emily. During the Civil War the Blackwell sisters trained nurses for Union Hospitals, working closely with Nightingale to provide care to the sick and wounded. In 1868, Dr. Blackwell opened the Women’s Medical College in New York City. When she returned to London in 1869, she left her sister Emily to run the school.

In 1875, Dr. Blackwell became a professor of gynecology at the New London School of Medicine for Women. She helped to found the National Health Society in the U.K. and was the author of many publications. She was also the first woman to be listed in the British Medical Register. Dr. Blackwell retired from medicine in 1907 and died on May 31, 1910. She is buried in Kilmun, Scotland.