In the 1920s, Hilda Freeman was employed as a clerk by the Syracuse Health Department. The notably excellent records on communicable diseases coming out of Syracuse were attributed to Ms. Freeman’s work and she was recruited by then Director of the Division of Communicable Diseases of the New York State Department of Health (NYSDH), Dr. Edward S. Godfrey, to join his team in Albany. Ms. Freeman was encouraged to take courses in statistics through John’s Hopkins and began work as a biostatistician. She was employed by the NYSDH at a time when it employed eleven women scientists, nearly as many female scientists as the entire US Public Health Service.

Ms. Freeman married Dr. A. Clement Silverman MD, who was made director of Syracuse’s Bureau of Communicable Diseases in 1923. Together, they were at the forefront of the city’s adoption of preventive measures against diphtheria, polio and typhoid. Dr. Silverman would lead a long and industrious career in Syracuse. 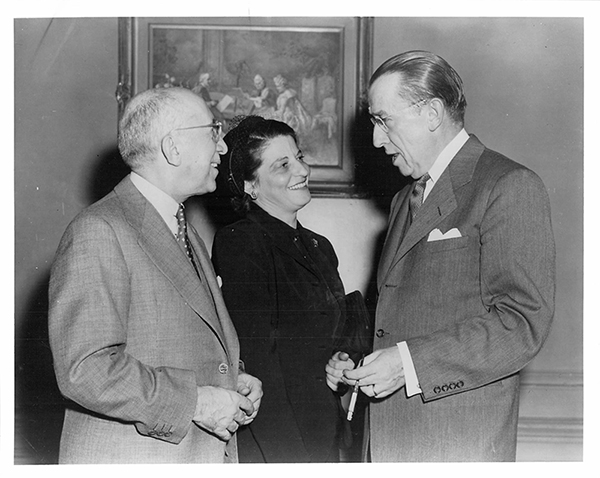 Mrs. Silverman’s capabilities as a biostatistician and deep understanding of the nature of communicable diseases were so valuable that the NYSDH implored her to continue her work even after her marriage moved her back to Syracuse. Her data provided key components to the plethora of papers published by that department in the 1930s and 1940s. Included in this research were measles, diphtheria, typhoid fever, food poisoning, poliomyelitis, streptococcal infections, pneumococcal infections, and air-borne infections. She assisted Dr. Godfrey in his study of measles in children’s institutions as well as the effects of immunizing a certain percentage of preschool children against diphtheria, which showed a significant reduction in the number of deaths from both diseases. Mrs. Silverman’s statistical methods were integral to successful studies in the 1930s on the effectiveness of new pertussis vaccines and in 1944 on the spread of the polio epidemic in New York.

Mrs. Silverman died as the result of an automobile accident on October 21, 1953. She was traveling as part of her work with the NYSDH, following up on a field visit to one of three large rural schools in which attempts to control spread of infectious diseases were underway.

The Hilda Freeman Silverman memorial lecture was established at Upstate Medical University in 1954 by the department of Pediatrics, where her husband was chair; the event was the first named lectureship established at Upstate Medical University. The name was updated after Dr. Silverman's death in 1970 to the A. Clement Silverman and Hilda Freeman Silverman Memorial Lecture. The lectureship is held annually and has featured such prominent speakers as Albert B. Sabin MD, the developer of the oral live polio vaccine (1964) and Paul D. Parkman MD, developer of the rubella vaccine (1969).