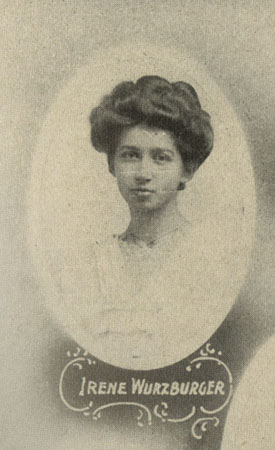 A native of Syracuse, NY, Irene M. Dunn completed her undergraduate degree in Liberal Arts at Syracuse University and graduated from the Syracuse University College of Medicine with an MD in 1909. In her third year of medical school she completed a residency at St. Mary’s hospital in Syracuse where she worked round the clock to prevent a diphtheria epidemic.

Dr. Dunn was one of two women in a class of thirty-three graduates. She remembers always wanting to be a doctor and that her family encouraged her to pursue her calling. She found her classmates to be supportive and in a 1974 article in the Syracuse Herald-Journal she recalled, ‘Many of the women students ask me about discrimination in the early days. I can say from my experience I never noticed that I was pushed into the background because of my sex. Granted, I didn’t ride the ambulance like the male interns, but you must remember that in those days there was only room for the stretcher in the ambulance and the interns had to hang on the back of the vehicle.’ Despite a relatively positive experience, especially considering that the Women’s Suffrage movement had not yet won women the right to vote, she admits that women were expected to go into pediatrics or obstetrics and gynecology and that there were no women surgeons at the time.

Dr. Dunn was a pediatrician by specialty, but took most cases that came her way. She spent her early years of practice on the city’s north side, opening her office on the corner of Pond and Park streets. She and her family moved to the west coast where she became a school physician in Los Angeles. She would retire after 65 years of active practice.

Dr. Dunn led an adventurous life and was widely travelled. One trip was curtailed when her boat, the SS Santa Maria, was hijacked between Florida and South America on January 21, 1961. Dr. Dunn and 620 other passengers, including 42 Americans, were held on board for twelve days. The ship was taken by a band of Portuguese rebels supporting General Humberto Delgado in a bid to overthrow Portugal’s dictator Antonio de Oliveira Salazar. Dr. Dunn provided a personal account of the incident for the February, 1962 Alumni News. Despite her harrowing experience, Dr. Dunn continued to travel and took another cruise as early as February 1962.