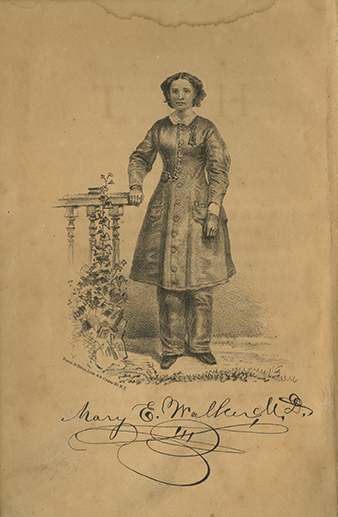 Mary Edwards Walker was born in Oswego, NY in 1832. The fifth daughter of Alvah and Vesta Whitcomb Walker, she was encouraged by her parents to pursue knowledge. Her sisters all became teachers, but Mary enrolled at the eclectic Syracuse Medical College (unaffiliated with Syracuse University College of Medicine, which did not open until 1872). She completed her doctor of medicine degree in 1855, a mere six years after Elizabeth Blackwell, the first woman to earn an MD,  graduated from Geneva College of Medicine (the Geneva College of Medicine was sold to Syracuse University in 1872). Dr. Walker married a physician named Albert Miller and began a private practice in Rome, NY.

At the outbreak of the Civil War, Dr. Walker tried to enlist with the Union Army, but refused to do so as a nurse. Instead, she accepted an unpaid volunteer position in a temporary hospital outside the Patent Office in Washington D.C. While working in the capital she organized the Women’s Relief Organization to aid the wives and mothers of wounded soldiers who came to visit the hospitals. Dr. Walker transferred to Virginia in 1862 and continued to work without official standing.

Finally, in September of 1863 Dr. Walker was given official employment by the War Department. She was appointed an acting assistant surgeon, a position equal in status to a lieutenant or captain depending on length of service, with the Ohio 52nd Infantry. Though limited documentation exists to confirm the events of the next months, it is believed that in April 1864 Dr. Walker was taken as a prison of war and held for four months in Confederate captivity. She was exchanged with other Union doctors for Confederate medical officers and upon her return was made medical director of a hospital for female prisoners in Louisville, KY.

For her work during the War, Dr. Walker was awarded the Congressional Medal of Honor. She was the first woman and the only civilian to ever receive the award. Her Medal of Honor citation stated “She has devoted herself with much patriotic zeal to the sick and wounded, both in the field and hospitals.” She was commended by Major Generals William T. Sherman and George H. Thomas for meritorious service. Her name, along with 910 others, was removed from the honor roll in 1917 when the eligibility requirements were changed; her civilian status excluded her. Dr. Walker refused to surrender her medal and wore it for the rest of her life. Her award was reinstated by President Jimmy Carter in 1977.

Following the War, Dr. Walker left the practice of medicine and became an author, lecturer and active suffragist. Dr. Walker was a feminist before the term was coined. She spent years rebelling against accepted female fashions, arguing that they were designed to prevent women from fulfilling certain duties. She wore bloomer costumes and eventually took to wearing men’s clothes. She was arrested for impersonating a man on multiple occasions. Her most famous book, Hit: Essays on Women’s Rights was published in 1870.