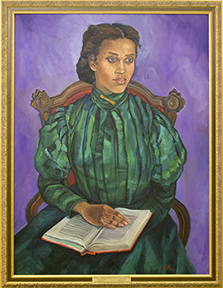 Sarah Loguen Fraser M.D. was born in 1850 in Syracuse, NY as Marinda Sarah Loguen. Her parents, Caroline Storum and the Reverend Jermain Wesley Loguen, were lifelong abolitionists and the family home was a safe house on the Underground Railroad that harbored nearly 1,500 escaped slaves on route to asylum in Canada.

Dr. Loguen Fraser graduated from the Syracuse University College of Medicine in 1876, making her the fourth Black woman in the United States to earn a formal medical degree. Her medical practice focused heavily on pediatric and obstetric care, due to need and personal inclination, but also owing to restrictions on women physicians of the era.

Dr. Loguen Fraser moved to the Dominican Republic with her husband Dr. Charles Fraser, a pharmacist and plantation owner, and was able to run a free clinic with the funds from her husband’s successful business. After the death of her husband in 1894, Dr. Loguen Fraser lived in Washington D.C., France, and even returned to Syracuse for a short time.

Dr. Loguen Fraser was educated during the propitious years following the end of slavery, before the abrupt end of the egalitarian movement that suffocated under constraints of Jim Crow racism. By the turn of the century, she found herself struggling financially and professionally. She continued to practice despite these obstacles and was honored by Howard University on the 50th anniversary of her graduation from medical school. She died of kidney disease at her daughter’s home in 1933.

SUNY Upstate has honored Dr. Loguen Fraser’s legacy by naming a street, Sarah Loguen Place, and the Dr. Sarah Loguen Center in her honor. A scholarship and annual lecture were established in 2000 to honor her 150th birthday.