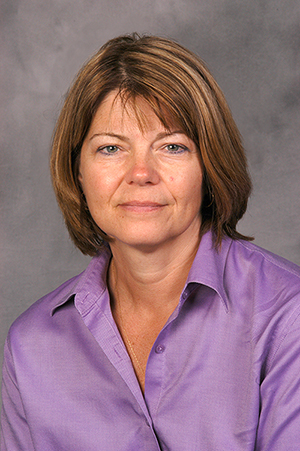 Nancy E. Page RN received her BS in Nursing at Downstate Medical University (formerly SUNY Health Science Center at Brooklyn) in 1981, and her MS in Pediatric Nursing at the University of Rochester in 1986. Ms. Page joined the nursing staff at Upstate University Hospital’s Pediatric Intensive Care Unit in 1982. She was elevated to Pediatric Clinical Nurse Specialist in 1986 and served as the clinical expert resource for all 62 in-patient pediatric beds, representing multiple specialties. She also created the core acute pediatric nursing orientation curriculum for training other nurses. In 1996, Ms. Page moved to the Diabetes Program in the Department of Pediatrics at University Hospital. In this role she was a nursing educator providing direct care to children with diabetes and their families in the outpatient, inpatient, school and camp settings, and certified as a diabetes educator and in advanced diabetes management. She remained with the Pediatric Department in various nursing rolls until 2000. In 1999, she took on the added responsibility of becoming Coordinator of Nursing Practice for the Hospital. She was responsible for growth of the Professional Nursing Practice Model, assuring nursing practice met regulatory requirements and standards, and implementation of a shared governance structure. She remained Coordinator of Nursing Practice until 2005, when she became the Hospital’s Patient Safety Officer. In this role, Ms. Page oversaw solutions to actual or potential patient safety events. The hand washing initiative she oversaw raised compliance in this arena to the 90th percentile. In 2007, she was made Director of Quality and Patient Safety for the Department of Emergency Medicine, where she was directly responsible for the quality and patient safety program for the tertiary care level 1 trauma center that received 72,000 annual visits.

Since 2014, Ms. Page has been the Chief Nursing Officer for Upstate Medical University, including both University Hospital and Community Hospital; she manages a combined nursing staff of 2,800. Since 2007, the previously high turnover rate for RN’s has been reduced to the national average of 14%. Under her leadership, a Magnet application was submitted in March 2018. If successful, Magnet status, which is awarded by the American Nurses Credentialing Center, will indicate Upstate’s commitment to excellence in healthcare through nursing goals that are directly in-line with patient outcomes. Magnet recognition will mean education and development opportunities for nurses at every career stage, and continuing a commitment to better patient care. Ms. Page has been involved with all aspects of nursing, from patient care to scholarly research, from nursing administration to patient safety, and now leads Nursing at Upstate into the next chapter of nursing excellence.